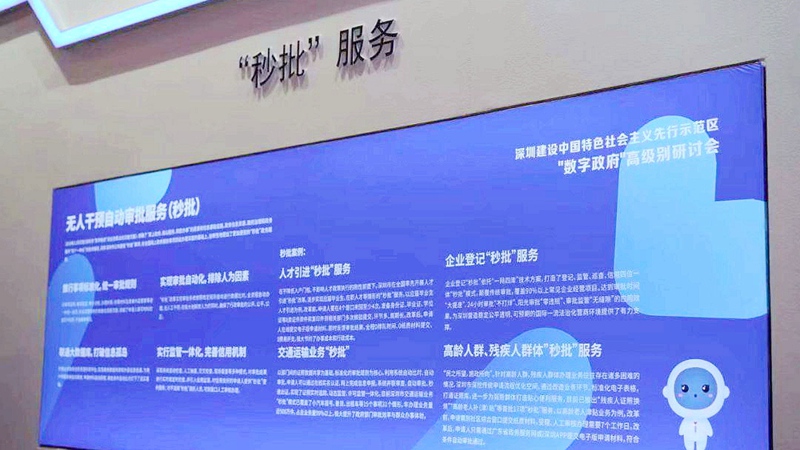 Shenzhen will strive to become a world-class new-type smart-city benchmark by increasing digitalization in social governance, Shenzhen Party chief Wang Weizhong said at a high-level seminar on Shenzhen Building a Demonstration Area of Socialism with Chinese Characteristics on Sunday.

The seminar, themed “Digital Government,” brought together more than 100 government officials and experts from home and abroad to brainstorm on upgrading Shenzhen’s smart city and digital government construction.

Wang said Shenzhen will borrow a page from the playbook of world-leading cities to form a sound data management and security system, speed up in-depth applications of big data, artificial intelligence, 5G and blockchain, and open a new space in the digital world by promoting the integration of technologies, data and businesses and realizing synergetic management and services across regions, systems, departments and industries.

Tan Kiat How, director-general of Singapore Infocomm Media Development Authority, shared his country’s practices in facing the challenges and opportunities of the digital era.

Shenzhen aims to build a new type of smart city operation and management system that is comprised of one city center, 11 district centers and a number of industrial centers.

A one-stop system implemented by Shenzhen Municipal Government that automatically reviews the information on the applicants of service items and approves their applications is displayed at Sunday’s seminar.

So far, the city center and district centers of Futian, Bao’an, Longgang and Pingshan have been completed, forming the backbone of the smart city’s operation and management, according to a report by Southcn.com yesterday.

Regarding livelihood, the information on personal documents like ID cards and driver’s licenses, as well as social insurance, library and bank cards, will be integrated into one account, through which residents can enjoy different types of services via fingerprint or facial recognition, or their ID or phone number. All of the services will be consolidated on an official app.

In a ranking released by the Information Research Center of the Chinese Academy of Social Sciences at the 2019 Smart China Annual Conference in Beijing on Nov. 28, Shenzhen ranked first among Chinese cities in smart city development with a comprehensive score of 77.4 points and was awarded a prize for taking the lead in smart city construction.