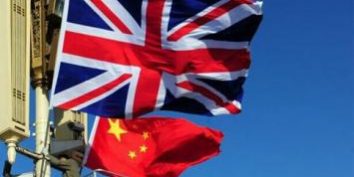 Shenzhen and the United Kingdom have big potential for cooperation, new British Consul General to South China Alastair Morgan said during his first visit to Shenzhen on Thursday.

“Looking at the scope of British engagement in Hong Kong, you can see how much the scope of Shenzhen and U.K. trade and cooperation could be,” Morgan told Shenzhen Vice Mayor Chen Gaihu at a meeting at the Civic Center. The size of Shenzhen’s GDP is about 60 percent of that of Hong Kong.

The consul general discussed practical areas of U.K.-Shenzhen cooperation with the vice mayor, including financial services and low carbon technology.

Morgan said British enterprises could help with Shenzhen’s financial services, urban development and the pharmaceuticals industry, while Shenzhen companies like Huawei, ZTE and BYD had a lot of opportunities in the U.K.

Morgan stressed that Britain was willing to help China reduce carbon emissions. “We are able to introduce expertise to help you cope with that challenge,” he said.

Guangdong was chosen as one of the pilot areas for the U.K.-China Low Carbon Cooperation (LCC) agreement signed by China and the U.K. earlier this month.

Morgan, who visited Huawei on Thursday morning, said he found that Huawei had hired 500 people in the U.K. “Seventy-five percent are U.K. nationals,” said Morgan.

“Companies like Huawei have great prospects in the U.K. We are very supportive,” he said.

Morgan said the size of the consular area posed a big challenge for him and his staff.

The total population of the six provinces is close to that of the EU, he said, and the land area of Guangdong alone was larger than the U.K. “I’m supposed to run the consular area with only 90 staff,” said Morgan, smiling.

The huge changes brought about by the rapid Chinese growth was also a big challenge. The huge changes in infrastructure and the nature of the Chinese economy brought enormous opportunities to the British economy.

Morgan was the Commercial Counsellor and Director of Trade and Investment for China at the British Embassy in Beijing for three years before he was assigned to Guangzhou. He is married with three children.

One of his hobbies is walking and another is “studying Chinese.” His Chinese has reached the level where he is able to appreciate Chinese literature. His favorite Chinese novels are “Huozhe” by Yu Hua and “Musilin de Zangli” by Huo Da.

“Now I’ve started reading ‘Pingfan de Shijie,’ and I hope to finish it by the end of my term,” said Morgan, with a laugh.