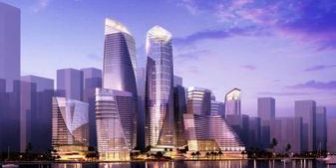 It’s the city where the average age is 28, old people are almost non-existent and where women once outnumbered men by seven to one. It’s where one third of the world’s mobile phones are made and where Maseratis, BMWs and Mercedes are as commonplace as the eight-lane highways they navigate.

Welcome to Shenzhen, the Silicon Valley of China. Thirty-six years ago it was a village of 30,000 residents. Today, 14 million people call it home and for anyone wanting to see what the Chinese economic miracle really looks like, the place to go.

Just over the border from Hong Kong, it contradicts many preconceptions about China. It’s green and much cleaner than most Chinese cities. Bright red bougainvillea fill highway median strips while palms, flowering oleanders and ficus trees line the verges. Close to the city, they are replaced by trimmed box hedges, grasses and ferns and there’s a plan to become the “Garden city of tomorrow”.

It’s a place to think big, then bigger. Mission Hills resort, about one hour’s drive from the CBD, has 12, 18-hole golf courses (the world’s largest golf club says the Guinness Book of Records) and 46 tennis courts.

Arrive at the city’s Bao’an international airport and its breathtaking honeycomb design is an indication of what’s to come in a city with inspired architecture. While Sydney continues to agonise and debate its new airport at Badgerys Creek, Shenzhen has another terminal on the drawing board to service the proposed 18 million who will live here by 2020.

Shenzhen is the face of modern China. Photo: Getty Images

High rise signage is minimal but companies that help put the city’s GDP at more than $US200 billion softly show themselves. They include Chinese telecom giants Huawei and ZTE, web developer Tencent and Taiwanese electronics contract manufacturer Foxconn.

Even though it’s only existed three decades, modern Shenzhen already has a futuristic, seven-storey industrial museum to catalogue its innovations in everything from the internet to new energy, communications to security systems. There are government sponsored start-up hubs and more than one million residents are from outside China.

New ideas are often calculated by the number of patents registered against them and the World Intellectual Property Organisation (WIPO) reports that in 2014, for the second successive year, Huawei Technologies registered more than any other global company. ZTE was third and for every 10,000 Shenzhen residents, there are 66 registered patents.

Creative thinkers share many traits and, like other high tech hubs around the world, Shenzhen is very “open minded”, says my guide, Chen, and has a flourishing arts scene with recognition for its jewellery design. “Shenzhen is a city that loves reading,” they say. Libraries and reading clubs abound and is home to China’s largest book store. There’s a love of coffee and a diverse restaurant scene, in line with its multicultural population.

Each year, 1.6 million Australians visit China. A significant number go to play golf at Mission Hills while many others hop across the border from Hong Kong to shop.

But there’s much more to attract the tourist. It’s home to multiple theme parks including the slightly bizarre Windows on the World, with its miniatures of world-famous landmarks, and Splendid China, which does the same for home-grown sights like the Great Wall. Add to this safari and military parks, Movie Town, Cartoon City and a Wet ‘n’ Wild opening in October. There’s also a long coastline with walking paths and cycle ways.

But the outing that says most about today’s Shenzhen is the walk to the top of Lotus Hill, set in a 166-hectare park in the city centre. At the top, there’s a splendid, 180-degree view of the cityscape including the Civic Centre with its audacious bird, or wave, shaped roof.

There’s also a six-metre high bronze statue of Deng Xiaoping. “We very much respect Chairman Mao,” says Chen. “But Deng Xiaoping is the grandfather. That’s what we call him here.” For it was this national leader (1978-1989) who brought economic reforms that opened China to the global market, allowing private competition and ownership.

In 1980, Shenzhen became China’s first Special Economic Zone, an experimental ground for market capitalism. Its relaxed residency rules saw an influx of young women from the country hence the extreme gender in-balance, later corrected by government. Permanent residency remains hard to obtain for Chinese and since it barely existed 36 years ago, almost no elderly live here.

But it remains a magnet and locals share a wry humour with Australians about real estate. “One million yuan ($200,000) buys you an expensive toilet in Shenzhen,” says Chen.

Previously, visitors went through Guangzhou or Hong Kong airports, thereby missing the one-hour drive from Bao’an airport to the city with its glimpse at where 14 million people are accommodated.

For much of the journey, there’s dense tropical rainforest on hilly terrain to one side. On the other, a ribbon of high rise, low rise and single storey apartments and a few houses stretching almost the entire 32 kilometres. There are small businesses but the huge factories, with dormitory housing, are elsewhere.

Occasionally, there’s a tiny patch of cultivated land where someone grows vegies and I see one traditional pagoda, the only sighting anywhere in the city.

This is the face of modern China. They even charge tolls to use the road.