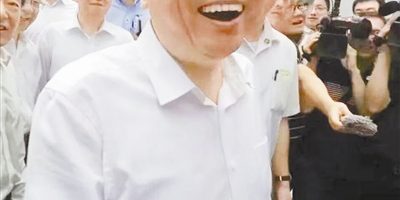 APPLE has decided to set up a research and development center in Shenzhen, its second facility in China after Beijing, to focus on manufacturing and software development.

The announcement was made by Apple CEO Tim Cook during a meeting with Shenzhen Party chief Ma Xingrui and Mayor Xu Qin on Tuesday. He is in Shenzhen to attend the 2016 National Mass Innovation and Entrepreneurship Week, which opened yesterday.

Around 100,000 people are developing software for Apple in Shenzhen currently, said Cook, who rated the quality of Shenzhen software developers’ products as top in the world. He said Shenzhen is a remarkable city with a lot of talent from many different sectors and Apple planned to seize the manpower advantage to increase investment on research.

China is Apple’s major overseas market. But iPhones are facing growing challenges posed by Chinese competitors like Huawei, Oppo and Vivo. During his visit to China in August, Cook unveiled Apple’s first research center in Beijing.

Shenzhen is China’s high-tech hub, investing a whopping 4.05 percent of its GDP into research and development, and hosting a number of top tech firms like Huawei and ZTE.

Cook said he “couldn’t wait” to come to Shenzhen for the seven-day innovation week and was honored to be invited to attend the Global Entrepreneurial Leaders Forum in the city.

He also said that there’s no other place like Shenzhen to be the ideal city for hosting such a large-scale maker fair.

When speaking of the key factors that lead to the success of makers, Cook quoted the English idiom “Falling down seven times and get up eight” to encourage makers to be persistent and not to give up on their dreams easily.

Shenzhen was the first Chinese city that Cook visited when he came more than two decades ago and the city has changed tremendously over the two decades, he said.

Cook praised Shenzhen’s leading roles in multiple areas, which in the CEO’s eyes, were a key factor making Shenzhen an extraordinary city.

“Apple has been focusing on innovative products with advanced manufacturing skills and I found many factories in Shenzhen have better skills than many other places in the world, so as more of our new products come out, we hire more employees here,” said Cook.

Cook also visited the Apple store near Window of the World in Nanshan District and stopped by a Starbucks coffee on Xinwen Road in Futian.