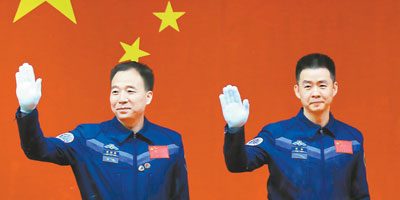 THE Shenzhou-11 manned spacecraft is expected to be launched at 7:30 a.m. today, which will take two male astronauts Jing Haipeng and Chen Dong into space.

The mission will be carried out with a Long March-2F carrier rocket, said Wu Ping, deputy director of China’s manned space engineering office, at a press conference at the Jiuquan Satellite Launch Center, yesterday.

The spacecraft will dock with orbiting space lab Tiangong-2 within two days, and the astronauts will stay in the space lab for 30 days, she said.

After that the Shenzhou-11 spaceship will separate with Tiangong-2 and return to Earth within one day.

The mission aims to transport personnel and materials between Earth and Tiangong-2, and examine rendezvous, docking and return technologies.

During the mission, the spacecraft will form a complex with Tiangong-2. The complex’s capabilities of supporting astronauts’ life, work and health, and astronauts’ abilities for carrying out flight missions will be tested.

Other objectives include conducting aerospace medical experiments, space science experiments and in-orbit maintenance with human participation, along with activities to popularize scientific knowledge, she said.

The two astronauts will undertake ultrasound tests during space travel, cultivate plants in space, and test the three winners of an experiment design competition for Hong Kong secondary school students.

Several technical alterations have been made to Shenzhou-11, though its main functions and technical parameters remain basically the same with Shenzhou-10, Wu said.

To meet the needs of this mission, the orbit control strategy and flight procedures have been adjusted to adapt Shenzhou-11 to the change of the rendezvous, docking and return orbit from 343 kilometers to 393 kilometers from Earth.

Tiangong-2 has been maneuvered into a near circular orbit 393 kilometers from Earth, where it will rendezvous and dock with Shenzhou-11, Wu said, adding Tiangong-2 is now “ready.” Launched on Sept. 15, Tiangong-2 has been orbiting for a little more than one month, and remained “in a good condition,” Wu said.

Since Tiangong-2 entered orbit, its payload equipment has completed self-inspection and initial configuration, and space experiments, since Sept. 22, have been carried out as planned and produced results.

Since China initiated the manned space program, it has signed a number of cooperation deals with space agencies of many countries and international organizations.

With the establishment of its own space station, which is expected around 2020, China will carry out manned space missions on a regular basis, with spacecraft launched several times a year, instead of once every several years, said Zhang.

Besides astronauts, engineers and even tourists will then hopefully go to space, Zhang said.