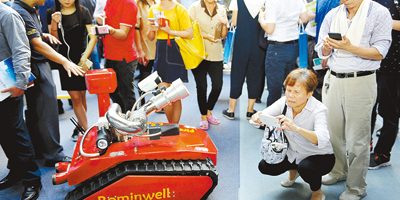 A SELF-PLAYING smart piano drew a crowd at the Shenzhen Bay Inno Park in Nanshan District during the National Mass Innovation and Entrepreneurship Week that kicked off Wednesday.

The FindPiano developed by Etango, an information technology company in Shanghai, can be controlled by a phone app to play as if there is an invisible pianist playing on it. It also has a display screen above the keyboard to showcase videos of pianists performing or giving piano lessons, while the piano’s keys go down and up as if the pianist in the video was controlling it.

“If two people in different places both have our pianos and Internet access, one can remotely play the other’s piano. It means that two pianists in different places can jointly play a piano duet at the same time,” said Frank Ma, general manager of the company’s offline sales center.

According to Ma, the company had invited top-notch piano teachers in China to make tutorial videos for its users, which can be downloaded on its phone app. When users play the video, the piano plays itself to facilitate their learning.

“There are around 10 million children who are learning the piano across China, but some of them fail to receive high-quality instruction,” Ma said. “Our mission is to make high-level piano teaching resources accessible to everyone.”

“I’m proud to say that the piano is the first of its kind in the world and it was developed in China,” he said.

In another exhibit booth, two roadster-like solar-powered cars were displayed by Hanergy, a Beijing-based company engaged in clean energy development. The top of each car is covered by thin-film photovoltaic cells to power the car.

“The car can run 80 kilometers after parking under the sun for around six to eight hours,” said a staffer of the company.

The staffer said the company had been developing the car for nearly two years, but it still needs a few years before the car will be ready for mass production. “The car is also equipped with a storage battery so that the driver can charge it like an electric car and drive it at night,” he said.

The company’s thin-film photovoltaic cells are also applied on drones and backpacks. Many visitors were interested in a foldable solar charger pack on display, which could fully charge a mobile phone with solar power as fast as using the phone’s original charger.

The wallet-size charger pack priced at 380 yuan is currently in mass production, according to the staffer.

Cao Yong, the company’s vice president, said people can try on different clothes via the virtual images on the machine, which could help them select suitable outfits in a more convenient way.

Another machine developed by the company can obtain a person’s physical measurements such as one’s height, waistline and shoulder width within five seconds with a camera.

According to Cao, the company is seeking cooperation with JD.com and vip.com. He said in the future users’ measurements will be uploaded to the cloud storage and the users can access their own measurements to try on clothes when shopping online.

The innovation week showcases the latest progress and experiences in innovation-driven development in 16,000-square-meter exhibition area.

It was first held in Beijing last October after Premier Li Keqiang called for “mass entrepreneurship and innovation” at the Summer Davos Forum in September 2014.