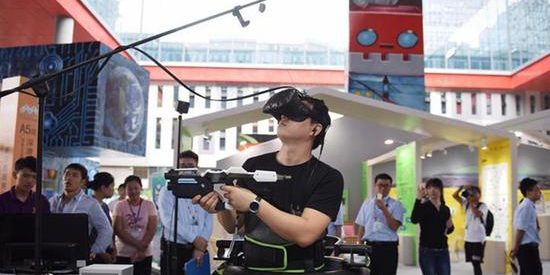 WITH the action of literally grabbing the words “2016 Shenzhen Student Maker Carnival” from a computer screen to a mega LED screen, a student opened this year’s maker festival for Shenzhen students by using VR (Virtual Reality) at the launch ceremony Thursday.

It is the second time that Shenzhen has organized the maker carnival for students of all ages from local schools. The first carnival was held last year in response to the country and the city’s goal of enhancing maker education for students.

While big shots from innovation and technology industries, both in China and other countries, are gathering in Shenzhen for the 2016 National Mass Innovation and Entrepreneurship Week that opened Wednesday, hundreds of local student makers proudly showcased their basic, yet exciting projects at the sports hall of Shenzhen No. 2 Senior High School in Nanshan District.

The school has been crowded since Thursday morning with the exhibition being held at the sports hall and several other makers competitions taking place at the same time around the campus.

Visitor, teacher and student delegations from other schools gathered at the school and wowed over this year’s student entries. The education department of Hong Kong also sent teachers and students to join the carnival Thursday. They paid visits to last year’s fair too.

Three students from Shenzhen Shiyan Public School in Bao’an District told the Shenzhen Daily that they had prepared for a long time to join the maker carnival. Unlike most of their peers who showcased cutting-edge technology such as 3-D Printing or VR, the three students were slicing carrots and building models out of carrot cubes and tooth picks.

“Our teacher taught us this to train us to imagine objects from multiple perspectives because makers should think not only in a single dimension but also in multiple dimensions,” said one of the students.

A student from the Affiliated High School of Peking University said that their team took 4.5 minutes to finish the assembling procedure, but the champion of the race, a team from Dongguan, took only 2.5 minutes.

The idea of Maker Education was first introduced to public schools in Shenzhen by the Shenzhen Municipal Government and the education department in 2014. The department also released a document that outlined a three-year plan for schools and educational institutions in order to enhance maker education among all students.

Fan said that over the past three years, 684 schools around the city had organized various kinds of maker activities and that the bureau plans to invest in 150 maker-related courses. In terms of infrastructure, the education bureau also assisted in opening 100 maker labs in schools and set up pilot schools for maker activities.

Not satisfied with what it had achieved in the past few years, the education bureau released another two guiding documents for maker education in Shenzhen schools at Thursday’s opening ceremony.

The guidance outlined curriculum requirements, evaluation benchmarks and other standards for maker education.

The requirements get higher for students in higher grades. Students from Grade nine to 12 would be taught to learn the use of software such as APP Inventor, 3-D printing and other designing tools.