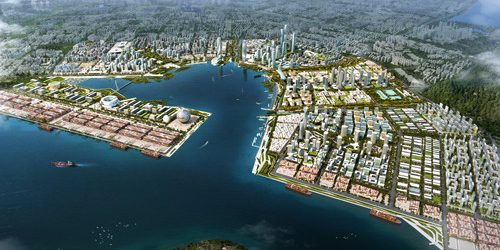 Aimed to boost the capacity for cooperation between China and overseas countries, especially Russia, this year’s forum is cohosted by the China Overseas Development Association (CODA), one of its founders, and the China (Guangdong) Pilot Free Trade Zone Qianhai and Shekou Area of Shenzhen (Qianhai-Shekou FTZ) Authority, which strive to play a bigger role in China’s “Going Global” strategy.

Ma Xingrui, Shenzhen Party chief, introduced Shenzhen and Qianhai at the forum and announced that the forum would settle in Qianhai permanently, starting next year.

“As a bridge connecting Hong Kong and the mainland, Qianhai should provide more convenience to investors and become a ‘golden tunnel’ for foreign investments and enterprises that want to go global,” Ma said.

Tian Fu, a member of the Standing Committee of the Shenzhen Municipal Committee of the CPC and director of the Qianhai-Shekou FTZ Authority, told the Shenzhen Daily that the fair would generate more vitality once it is held in Qianhai. In the meantime, Qianhai will develop into a globally influential platform that can represent China and better serve enterprises.

In late April, CODA signed a contract with the Qianhai-Shekou FTZ Authority to co-host future COIFAIRs.

According to statistics released at the end of September, a total of 4,509 enterprises have been set up in the Qianhai-Shekou FTZ by major investors whose businesses are involved in the Belt and Road countries. Their investments amounted to 357.466 billion yuan (US$53.12 billion). Contracted investment made by Qianhai enterprises reached US$6.592 billion, up 140.49 percent from last year. Qianhai enterprises have directly invested in 28 companies from 10 of the Belt and Road countries. Their total investment reached US$1.171 billion.

So far, many FTZ enterprises have either made huge investments or merged with big overseas companies. For instance, China Merchants Group is operating 39 ports globally, and Shenzhen Qianhai Financial Holdings Co., with another Shenzhen company, is going to buy Singapore’s ACR Capital Holdings Pte Ltd.

Approved by the National Development and Reform Commission in 2009, COIFAIR is focused on developing new forces for economic growth, creating favorable conditions for global development and optimizing global production through international cooperation.

The fair will close Friday