SZ Sets Up Trade, Investment and Innovation Center in Michigan 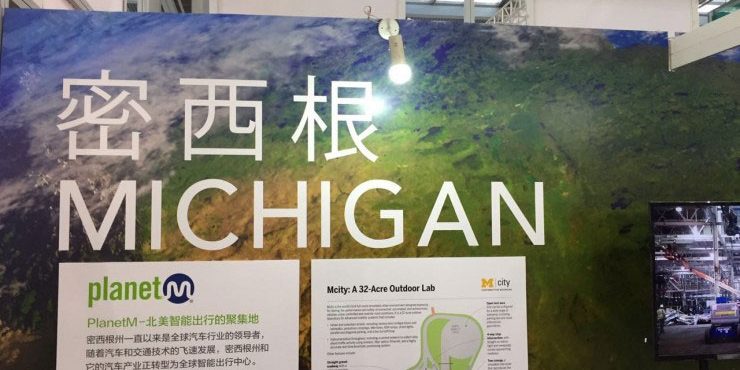 A delegation led by the governor of the U.S. State of Michigan, Rick Snyder, and the mayor of Detroit, Mike Duggan, visited the 18th China Hi-Tech Fair (CHTF), which opened yesterday, and signed a Memorandum of Understanding for economic partnership with Shenzhen’s Party chief Ma Xingrui and Mayor Xu Qin.

The signing of the MOU symbolized that Shenzhen and the State of Michigan, especially Detroit, will have closer ties with each other in such fields as technological innovation, trade and autonomous vehicle development.

A Michigan-Shenzhen Innovation Center will soon be set up in Michigan.

“I believe it [Michigan-Shenzhen Innovation Center] is going to be a good gateway. There are innovative, young companies and entrepreneurs working back and forth between Shenzhen and Michigan,” said the governor during an interview at the Shenzhen Convention and Exhibition Center after the fair was officially opened yesterday morning.

The officials from both countries also witnessed two other deals signed yesterday. One of the deals was a project to cultivate innovative talents from the Beijing Institute of Collaborative Innovation, Southern University of Science and Technology, and University of Michigan.

Another project was an agreement that a Shenzhen-based foundation of advanced high-tech industries will invest US$27 million to support the University of Michigan’s R&D in intellectual vehicles.

In return, researchers from the University of Michigan will provide suggestions and plans, including the recently launched project called Planet M, for Shenzhen’s autonomous vehicle industry, and help to test the vehicles made by Shenzhen automakers.

Talking about the ties between Shenzhen and Detroit, Duggan said that there is a convergence going on between the two cities, particularly in intelligent, autonomous, and connected vehicles.

“A hundred years ago, Detroit was the center of innovation and we are very excited to be now establishing ourselves as the center of the next generation for manufacturing. So we want to take latest research technology and be the place of pioneers,” said Duggan.

Snyder, who has visited China six times since beginning his tenure as Michigan governor, said that Detroit can learn a lot from Shenzhen.

“Detroit is now one of the top five cities in America that attracts the millennial. Young people are coming to Detroit in an amazing number. We are building 5,000 housing units right now and the mayor in Shenzhen told us they are going to build 400,000. In Detroit, we are building for the first time in 50 years, so there’s much that we can learn from Shenzhen,” said the Governor.

At the State of Michigan’s exhibition booth, eleven companies from the State were prepared to introduce and explain their projects, which were mainly advanced technology and intelligent vehicles, to local visitors and other exhibitors from all around the world.