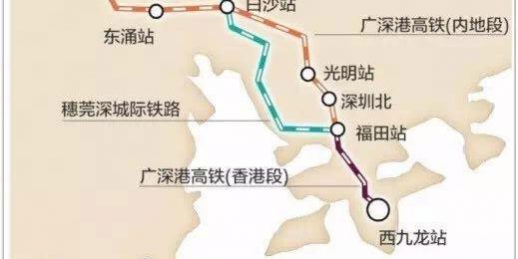 The high-speed railway connecting Guangzhou, Shenzhen and Hong Kong may be put into use by 2018 as the construction of the railway in Hong Kong was officially finished Friday, according to the Guangdong Provincial Government’s official WeChat account.

Based on the introduction made by the China Railway First Group, the Hong Kong section was the core construction of the high-speed railway project that links Guangzhou, Shenzhen and Hong Kong. Now that the railway has been successfully laid in Hong Kong, the whole railway line has been completed.

The trains are planned to run at a speed of 350 km per hour with the speed dropping to 250 km per hour for the Shenzhen-Hong Kong section.

Moreover, thanks to the new high-speed railway, it will only take nine hours to go from Hong Kong to Beijing. Two intercity lines will join the high-speed railway in Guangzhou, which means that residents in Dongguan, Heyuan, Huizhou and some other cities in Guangdong can go to Hong Kong directly by train.