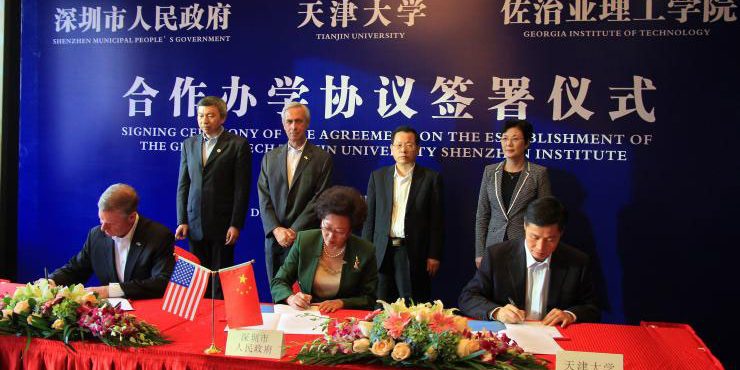 Another jointly built university is expected to settle in Shenzhen soon. The Shenzhen Municipal Government inked a cooperation deal with Tianjin University and Georgia Institute of Technology (Georgia Tech) on Friday to build a college in Shenzhen.

With the advanced technological resources provided by two of the top tech institutions, the new college will hire quality instructors from the two universities and employ others from all around the world.

The majors provided at the institution will integrate closely with Shenzhen’s industrial development in three key aspects, namely green building and the sponge city, data analysis and signal processing as well as the development of wearable devices, printed electronics and advanced telecommunication.

During the signing ceremony, Wu, representing the Shenzhen Municipal Government, pledged that the city would fully cooperate with Tianjin University and Georgia Tech to build a world-class techno-logy institute in Shenzhen.

The two presidents also expressed their expectations about the cooperation, and said that they would contribute to the city’s development of tertiary education with their personnel resources as well as experiences teaching about technology.

Tianjin University is one of the best technology institutions in China.