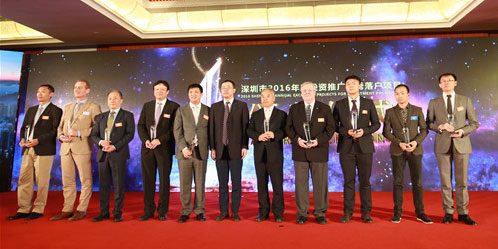 A total of 275 Fortune 500 companies have so far invested and set up offices in Shenzhen, setting a new record for the city’s work of investment promotion, announced Wang Youming, director of Invest Shenzhen, on Thursday afternoon.

Wang made the announcement at the 2016 Shenzhen Major Investment Promotion Projects Signing Ceremony at the Civic Center ahead of the signing of 31 major projects for cooperation between the Shenzhen Municipal Government and companies from all around the globe in multiple areas including high-tech, Internet, finance, life health and so forth.

The director concluded that 2016 was a fruitful year for Shenzhen in terms of trades and investment.

“This year, many Fortune 500 companies have settled their branches in Shenzhen. For example, the operating center of Apple Inc. in southern China, the Shenzhen innovation center of Qualcomm and the Internet laboratory of Microsoft entered the city this year,” said Wang.

Besides the signing of the 31 major projects, an array of awards were given to outstanding investment projects, industrial parks and institutions at Thursday’s signing ceremony.

Ten cooperative projects initiated by both domestic and overseas companies received awards for settling and investing in Shenzhen as the 2016 Shenzhen Annual Excellent Projects for Investment Promotion.

Another 10 institutions including the Industry 4.0 Alliance, Hungary Innovation and Technology Center and France SALVEO Group were awarded as excellent institutions for global investment promotion.

According to Wang, the city initiated a “NEST Strategy” to attract investment from all around the world at the beginning of this year and the outcome seemed to satisfy everyone.

The bureau has higher aims for next year. “Looking forward to 2017, we will promote many cutting-edge industries and advanced business models, such as next-generation communication networks, artificial intelligence, new-energy automobiles and precision medicine, so we welcome all of these companies to Shenzhen,” said Wang.