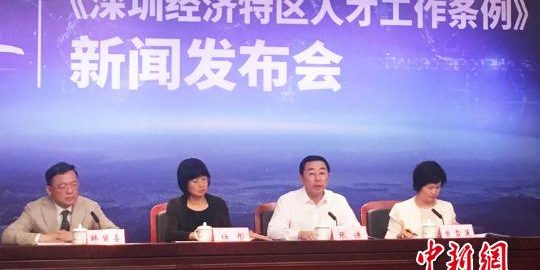 Shenzhen will celebrate its first Talent Day Wednesday with the opening of Shenzhen Talent Park along Shenzhen Bay in Nanshan District with an array of activities under the theme “Talent Carnival” to be held at the park.

The city has designated Nov. 1 as Talent Day, starting this year, with the aim of raising people’s awareness of the value of talents and their contributions, Zhang Qian, vice inspector of the Personnel Department of the Shenzhen Municipal Committee of the CPC, said at a press conference yesterday.

Also tomorrow, a revised regulation on attracting talents and better protecting the legitimate rights of employees will take effect in the city, according to the press conference.

The regulation was viewed and approved by the city’s legislature in August.

Researchers will be enabled free access to government-funded research equipment and apparatuses in their fields, and government departments and State-owned enterprises will open their doors to distinguished talents from private businesses and social organizations.

Among a package of measures to lure talent, Shenzhen will set up talent development funds and talent innovative startup funds, and provide 300,000 government-subsidized apartments for talents by 2020, which is 4.5 times that of the total for 2011-2015.

So far, LinkedIn, the world’s largest business- and employment-oriented social networking service that operates via websites and mobile apps, the headquarters of hrmarket.com, China’s largest online HR service platform, and ATD, the world’s largest talent development association based in the United States, have settled down in the city, according to Zeng Xuelian, deputy director of the city’s human resources and social security bureau.

About 321 human resources companies, such as Career International, Golden Rice Bowl, Liepin.com, and Bestway, have also set up offices in Shenzhen.