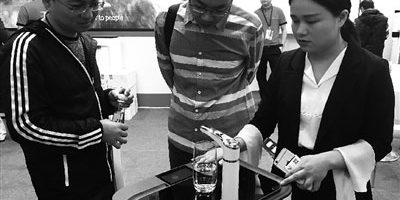 Shortages of fresh water have long been a challenge for humanity, especially in areas with water pollution and insufficient water resources. Now the problem might be solved once and for all as a Shenzhen-based company has developed atmospheric water generators that could extract potable water directly from the air.

The water generators are being displayed by the company, Cloudwater, at the 19th China Hi-Tech Fair (CHTF), which will wrap up Tuesday at the Shenzhen Convention and Exhibition Center.

Xiao Li’e, a marketing manager with the company, said the water generator can extract water from the air as long as it is powered by electricity. She said the air and the extracted water are both purified to ensure that the water is safe and drinkable, and the generator also circulates the water continuously to keep it fresh.

The water generators come in various sizes that can generate between 20 liters and 2 tons of water per day. “The generators have been put into use in some hospitals and banks in Shenzhen,” Xiao said, adding that the generators can also be powered by solar panels so that they can be used on islands and drilling platforms where it is inconvenient to get both potable water and electricity.

According to Xiao, the company is mainly leasing the generators to users instead of selling them. She said many stores provide barreled water for their customers, but using the water generators is more cost-effective compared with buying barrels of water. “The generators can provide cleaner water for people because bacteria will grow inside the barrels,” she said.

The company donated water generators worth 250,000 yuan (US$37,725) to a primary school in the northwestern mountainous region of Guizhou Province last June as the region has a severe shortage of safe water, Xiao said.

The company is also in talks with a wetland park in Shenzhen to set up water generators in the park and allow residents to get water by scanning a QR Code with their phone.

The water generator is one of many cutting-edge products promoting eco-friendly and green lifestyles on display in Hall 2 of the Shenzhen Convention and Exhibition Center.

An array of plant-equipped air purifiers developed by Shenzhen-based company Techand have drawn a lot of attention from visitors to the hall.

According to the company’s sales manager, Ma Liang, the purifiers are filled with plants that purify the air for users in the most natural way. He said the purifier is equipped with a water tank that automatically irrigates the plants, and users only have to refill the tank once a week.

Ma said the company has launched larger purifiers that people can use in their homes and offices, while smaller ones — such as a musical water purifier that can also work as a Bluetooth speaker — are also available.

“We’ve sold over 30,000 purifiers since we launched the first-generation product in March 2015,” Ma said, adding that the company is hoping to reach more customers and promote its products by attending the CHTF.An atmospheric water generator developed by a Shenzhen-based company, Cloudwater, on display at the 19th China Hi-Tech Fair (CHTF).