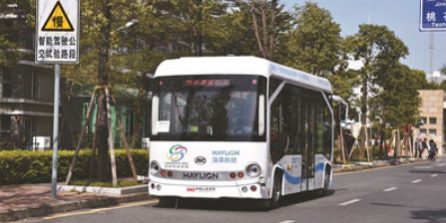 The smart buses, which are smaller than an ordinary bus and equipped with lidar sensors, cameras and GPS antennas, began running on a 1.2-kilometer route with three stops in the zone. They can avoid hitting pedestrians, vehicles and barriers, and can safely change lanes and stop at designated sites.

The buses have a designed speed of 10 to 30 kph and have a driver who can manually brake or switch the vehicle to manual driving mode in an emergency. The bus, with 17 seats, can carry 25 passengers. It can be fully charged in 40 minutes and can cover 150 km on a single charge.

The project was jointly developed by the National Intelligent Transport Systems Center of Engineering and Technology and Shenzhen Bus Group, and implemented by Shenzhen Haylion Science and Technology Co. Ltd.

During the trial operation period, the buses are only open to invited passengers and are being used to collect data.

“The system integrates multiple technologies, such as artificial intelligence, automatic control and visual computation. It has seven layers of safety protection, including lidar sensors, cameras and a GPS antenna, to analyze the road situation and respond in a timely manner,” said Hu Jianping, founder and chairman with Haylion.

Riders can pay with their Shenzhentong cards or by scanning a QR code. Riders from other cities, such as Beijing, Chongqing, Nanjing, Suzhou and Guangzhou, can also pay with their local transport cards.

The buses will be tried on the less congested urban roads at the Southern University of Science and Technology and in Guangming and Dapeng new areas in Shenzhen.

As a national model project, the system will be promoted in 10 Chinese cities in the future.

The driverless buses are expected to significantly lower emissions and solve traffic problems with their advanced data sharing abilities, as well as reduce labor costs and relieve drivers’ workload.

By August, the number of daily bus passengers reached 10.67 million in Shenzhen, which has more than 16,000 buses, according to a Shenzhen Commercial Daily report in September.

Several countries and regions, such as Singapore, the U.K., the U.S. and France, started trial operations for autonomous buses this year. Also, Taiwan tested autonomous buses in July and conducted a one-week trial, the Xinhua News Agency reported.