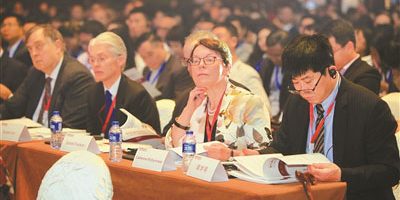 The Shenzhen-based Tian’an Cyber Park Group will set up a base at Royal Albert Dock to promote Guangdong brands in the U.K., according to an MOU signed at the opening of the 5th CBBC China Outbound Conference & China (Shenzhen)-U.K. Investment Cooperation Conference held at Futian Shangri-La, Shenzhen yesterday.

Supported by the Guangdong Provincial Commerce Department, the project, a collaboration between ABP (London) Investment Ltd. and CBBC (China-Britain Business Council), aims to boost trade between Guangdong and the U.K.

In another agreement signed yesterday, Tian’an Group and Silk Ventures will jointly build a Fintech Valley dedicated to the upgrading and transformation of the financial service industry through next-generation technologies such as fintech, block chain, cyber security and artificial intelligence (AI).

Sassoon expressed how he has been impressed with Shenzhen’s rapid development in the past decades and the city’s Patent Cooperation Treaty (PTC) applications, which accounted for nearly half of China’s total in 2016, at a meeting with Shenzhen Party chief Wang Weizhong.

“Shenzhen perhaps best embodies the remarkable transformation China has underdone over the past four decades and its remarkable success has been built both on its openness to trade and foreign investment, and on its reputation as a hub of technology and innovation,” said Sassoon.

It is unsurprising that Shenzhen is home to some of China’s most dynamic and fast growing companies, such as Huawei, Tencent, BYD and DJI, considering its annual investment in R&D, which averages 4.1 percent of its GDP, he said.

“The U.K. is a natural and an ideal partner for Chinese companies under the Belt and Road Initiative for its vibrant and open economy, innovation capabilities and industries that are highly complementary to China, and China’s innovation-driven development strategy is creating new opportunities for the two countries,” said Sassoon.

Chinese outbound investment, along with British innovation, can create win-win results by accelerating the pace of innovation, upgrading manufacturing bases and fostering a greener model of economic growth, according to Sassoon.

Statistics from the China Council for the Promotion of International Trade Shenzhen Committee (CCPIT Shenzhen), the co-organizer of the conference, show that the trade volume between Shenzhen and the U.K. reached US$5 billion between January and September this year, an increase of 12.3 percent over the same period last year.