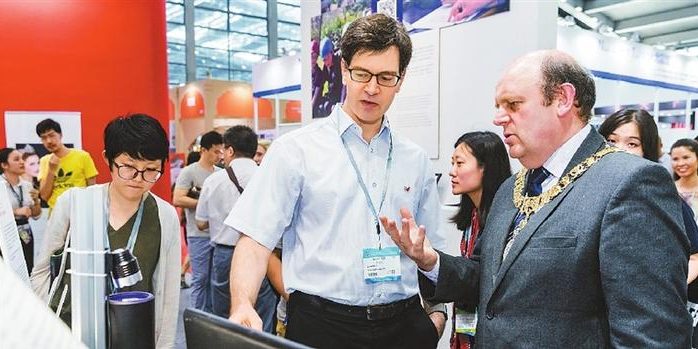 The activities held during the U.K. Creative Industry Exhibition were sponsored by the ESCE and organized by the Shenzhen Creative Investment Group. The City Council of Edinburgh also made great contributions to the communication and exchanges with support from the Scottish Development International (SDI).

In 2013, Edinburgh and Shenzhen jointly initiated a creative project designed to promote the creative industries in both cities. The ESCE was set up in both Shenzhen and Edinburgh under the collaboration. During the Collaboration Week, Frank Ross, Lord Provost of the City of Edinburgh, visited the Scotland booth at the ICIF and the ESCE.

At the invitation of the ESCE and the SDI, seven projects were showcased at the ICIF’s Belt & Road Hall at the Shenzhen Convention and Exhibition Center from May 10 to 14.

All of the projects were from Edinburgh and incubated at the ESCE. The projects showcased at the ICIF included 442 Design, an Edinburgh design company; Cragg & Tail, a Scottish luxury clothing brand for men; Merchiston International School, a British-style boarding school in Shenzhen; Sainted Media, an award-winning producer of children’s e-books and apps; Global Trails, an app that allows readers to explore the lives of iconic authors Ernest Hemingway and F. Scott Fitzgerald; Spot Sensors, a provider of IoT products as well as International Diabetes Centre, which was jointly built by Shenzhen People’s Hospital and University of Edinburgh.

The Edinburgh design company has accumulated experience designing for leading football clubs in the United Kingdom, such as Arsenal. The company also designs VIP hospitality and backstage tours for live entertainment venues.

Cragg & Tail, was founded in 2016 by Edinburgh-born designer Craig Mckellar.

Amid the iconic music of the traditional Scottish bagpipes performed by a pair of father and son bagpipers, the Edinburgh mayor, along with vice mayor Cllr Campbell and other delegates from Edinburgh, visited the Shenzhen Convention and Exhibition Center on May 12. The mayor talked with representatives of companies from Edinburgh.

After visiting the exhibitors at the Scotland booth, the mayor said that the collaboration between Edinburgh and Shenzhen had worked very well.

The next afternoon, the delegation from Edinburgh visited F518 Idea Land, where the ESCE is located. The director of the ESCE, Fan Qingqing, introduced the exchange incubator to the delegation and summarized its latest updates.

The mayor expressed his confidence in the promising future of the two cities’ collaboration during his tour to the exchange incubator.

Apart from the exhibition and tours, the ESCE has also announced it will initiate the application process for the Third Edinburgh-Shenzhen Innovation Competition. The projects that win the competition will be invited to attend an innovative product exhibition and a business promoting session organized by the ESCE in Edinburgh.

Since the ESCE project was established, it has achieved fruitful results in promoting startups in both Shenzhen and Edinburgh and paving the way for excellent projects to expand their overseas markets.